So over the weekend I headed out to Jersey to watch my nephew perform in 101 Dalmatians at a local community little kid (kindergarten and 1st graders) play production thing. I was psyched! 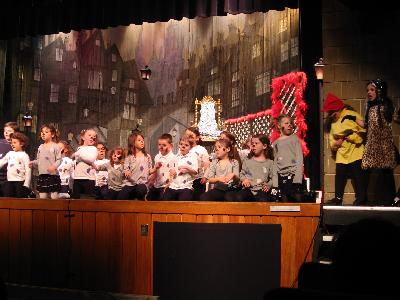 Anyway, I was excited to see 101 Dalmatians. Not only because my nephew was a dalmatian but I've never seen the movie and don't really know what happens in the story. I know there's dalmatians in it and some witchy lady with the hair but that's about it. So it was filling a blank for me. The lights come down and the music starts up and the kids start bouncing down the aisles toward the stage (i think it's always exciting when actors are in the aisles. even in a play this small with people this small.) They get up on stage and start singing.

Ok. Probably because there were poor acoustics in the theater or something ... but I couldn't understand one friggin word they were singing. It all seemed like the kids were all singing over each other or something. I was really straining to understand what was being said! And I honestly wanted to know the story! The theater must have been designed wrong! Then the girl who played Cruemella DaMille came out in pancake makeup and said some stuff. She seemed like a good little actress. Then they started singing again. Nothing. Not one word during the singing!

So I watched my nephew go this way and that way on the stage doing his thing with the other pups. He was a really good dalmatian! But I didn't get the story at all. I didn't understand who the side characters were! The stakes! The motivations! Nothing! I looked at my watch and we were only 10 minutes in! I figure the play would go on for at least 45-50 not including intermission! And I took a deep breath for the long haul of a state of confusion...

But fortunately around the fifteen minute mark all of a sudden the kids started bowing and everyone was clapping! The play was over! Every actor in the play was being introduced one by one for their personal bow which was coolio. I hooted for my nephew. Then everyone ran off stage. Literally 15 minutes. Done.

At first I was like, 'That's it?!' I was going to make a scene demand my money back! Maybe rip a seat right out of the floor and throw it! But seriously, the more I thought about it was a really good call. This was just a local community fun thing not a whole school play type dealio. The kids didn't seem to care that it was only 15 minutes. In fact it was probably preferred by everyone. The stars of the play got their moments to shine. The chorus kids got to do their thing without having to memorize too much. And the parents (and uncles) don't have to punch themselves in the side of the head to stay in the game after friggin 40 minutes.

In fact I think I wish more stuff was this way! Cut short! Maybe it's because I'm like old or whatever but stuff just takes too long alot lately! I think one hour is plenty for a rock concert. Get on. Play your songs. Get off. Done. I get it! I appreciate the effort of a three hour show but after an hour or so I'm sort of done with it. I got tv to watch! Snacks to eat! Movies can learn a lesson too. Hour and a half! Enough! That's it! You're a horror movie and you're over two hours? You're on crack! Cut it way down! Dinner at a restaurant? Keep it snappy! If I want to sit there for over an hour that's my business! They should work on my schedule! If I'm sitting there for over an hour against my will I get mental!