Warning: This is probably going to be the most boring thing I've ever written about here.

I'm not sure why I'm even bothering to write about this thing based on the high potential for absolute boringness but I'm going to do it anyway. Yeah, I realize that announcing whatever it is being that "boring" may in a way set this up to be seem not be completely boring--- and provide a glimmer of hope for an abnormal level of boringness which might teeter on "slightly interesting"-- but I'd rather squelch those hopes now. I can't imagine what's to come will be interesting enough even get to that level. Put it this way...

The peak of excitement will be this sentence which is schlumping by like a sloth in ski boots and now it's gone. There. It's all downhill now!

I guess what I'm about to write about is sort of gross which may count for something-- but it's not really gross enough to be that interesting either. Even on a gross level it falls short of interesting. But I might be wrong. I hope so. Decide for yourself. Or just bail out now! If you still suspect this may be just a ruse to downplay some sort of super exciting post to come you can let those hopes go. Most likely, the most exciting thing you can expect after reading the following is a big personal yawn-- but I'm not sure it can even generate enough interest to warrant that.

A couple months ago I noticed something under my fingernail at the bottom. At first I thought it was like some ink or something on top of my nail but I soon realized it was actually something under the nail. I was like... hmmm. What's that? And it's been going along upwards as my nail grows upwards ever since it appeared. It's almost at the top now.

Here's a photo of it. I tried to make the photo somewhat interesting as some sort of lame saving grace: 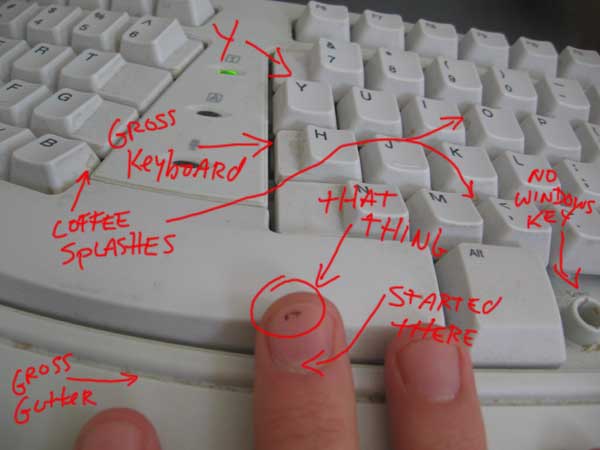 Anyway, at first I was like, 'Why's that there? Where'd it come from? Why is it in my nail? What did it break off from?' And since then I've been half assed watching this thing tag along as my fingernail grows up. Day by day. Week by week. Nail cut by nail cut. This thing has been making the slow journey to the top of my nail. Probably in a week or so it'll finally grow out of my nail and it'll be gone.

I guess I've been monitoring it with some low level of interest. It's like a marker for how fast my nail grows. My nails grow much slower than I initially thought. Originally I figured it would take a week-- but it takes like over two months for a new nail to grow! I guess it makes sense. If brand new nails grew weekly-- we'd like super slo-mo Wolverines doing slo-mo scratch fights.

Yeah. All in all, watching a nail grow is a pretty boring activity. I do still have some vague concerns about what it is and where it came from-- but not anything to cause any major paranoia. It seems pretty non-life-threatening. Maybe some sort of rogue blood vessel situation. I just hope that I'll be aware for when it finally does reach the top. Because I want to touch it before I (Ew! gag. throw up in my mouth a little.) and flick it away.

Gross! I hate thinking about it and I'm not crazy about looking at it-- but there it is!