Thanks to Ovation (+strike pics)

So last night I went out and met up with some friends in the city. The friend who organized the get-together told us to meet at this place called Dream Hotel which is one of those schmancy-ish midtown hotels. He told me to go up to the top floor and say that I'm there for 'Ovation'. I was like, 'Um... ok.'  I step off the elevator to some loungey space. I told the host guy that I was there for 'Ovation.'

I walk into a room of 50 or 60 people standing around in suits with name tags. All dressed corporately. I was wearing sneakers and my shirt was untucked, and felt undressed and awkward. Anyway,  I saw my friends in the back area. They were drinking champagne and eating hors d'oververs (or however the hell snacky snacks is spelt au francaise). I sit down and a cute server girl comes over with a plate of mini-hamburgers and asks me what I want to drink. I ordered a Miller Lite and wolfed down a super delicious mini-burger.

I asked my friend what 'Ovation' was. I figured it was a client of his or something. He said, 'I think it's a software company or something...' I was like, 'Oh... cool.' I snagged a yummy little turkey chili snack served in a mini flakey bowl and looked around. Then I was like, 'Wait. What are we doing here again?'

He sipped his champagne and told me we had no association to Ovation. Zero. He heard about this party when he was downstairs or something and wanted to check it out. I looked around the room and saw people looking over at us and talking. The place was mainly women dressed nicely and we were dressed not so good. Eating tons of snacks and 'networking' only with ourselves. I snagged a brochure thingee and saw it was actually a travel agency.

After fifteen minutes or so, the Chief Operating Officer lady came over and asked us if we were having a good time. We told her we were-- and we introduced ourselves. Not that we weren't already way suspicious-- but it didn't help that we introduced ourselves by our first names only. She smirkily asked if we needed anything and we told her we were good. She told us to just let her know if we need anything at all. We thanked her and continued to eat and drink on their dime for another hour or so. She totally knew we were crashing but was coolio about it totally.

So I just want to say thanks to Ovation Travel for being cool and not hucking us out like the derelicts we were!!... And for the very delicious mini-hamburgers. I must have eaten six of those things. Chompity chomp chomp!

PS. I went striking today! I'm part of the WGA since I wrote a movie script for Paramount (not getting made yet but still possible) and some other stuff. Tis weird that I have no writing work but am on strike.... Unemployed and on strike? But whatever! Gotta support the writers. Their argument makes real sense and producer dudes are being cocks!

Anyways here's some pics of picketing ...with some celeb sightings! 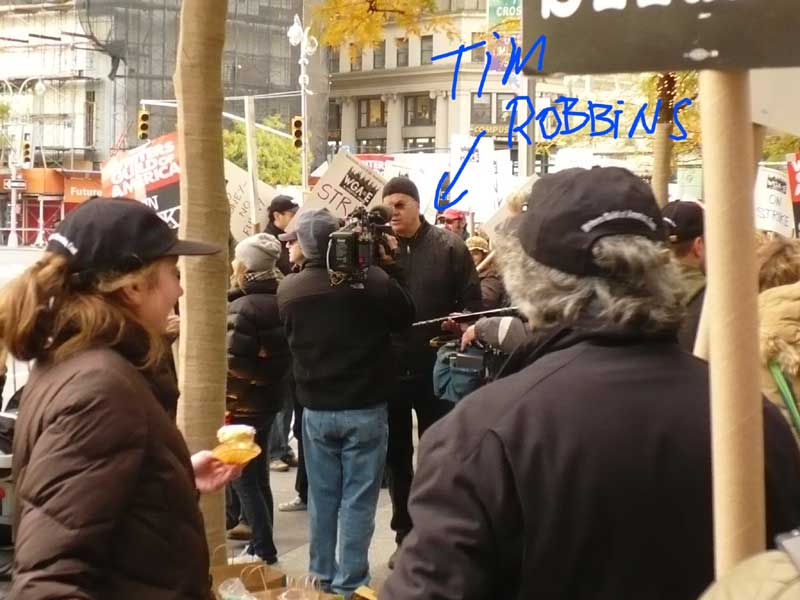 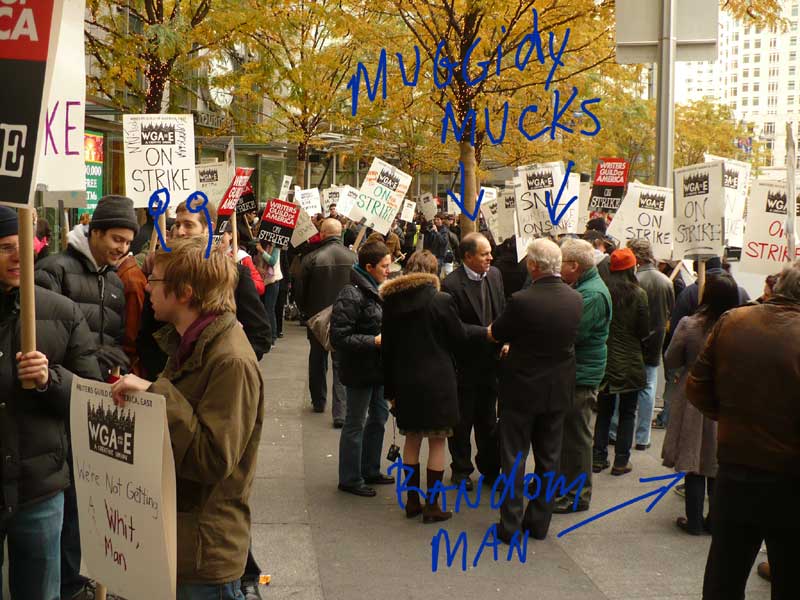 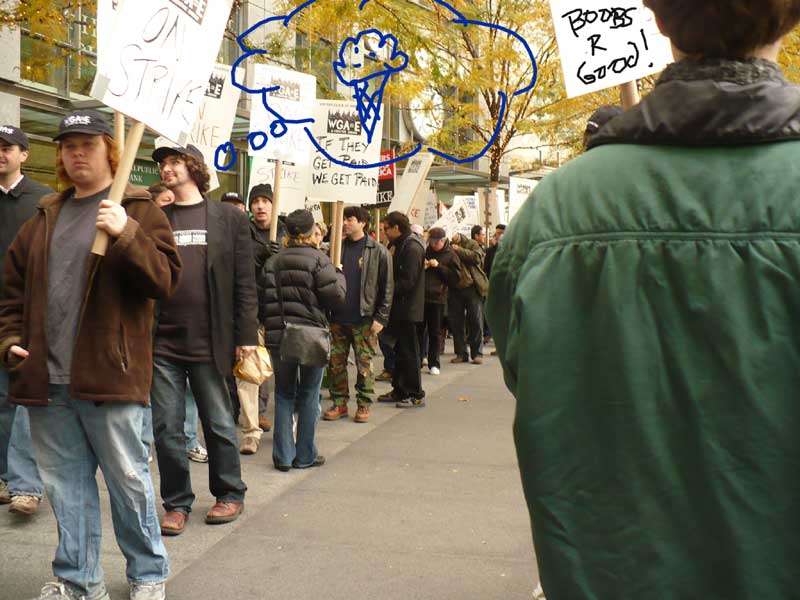 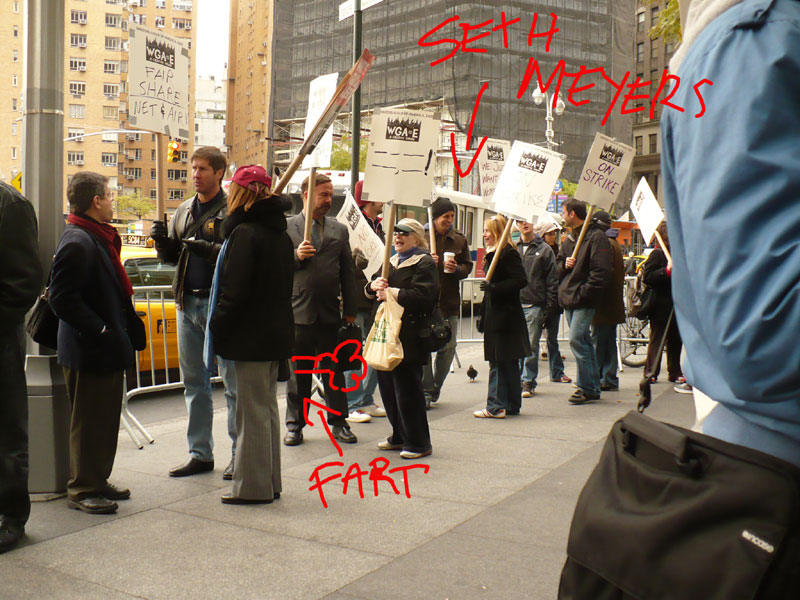 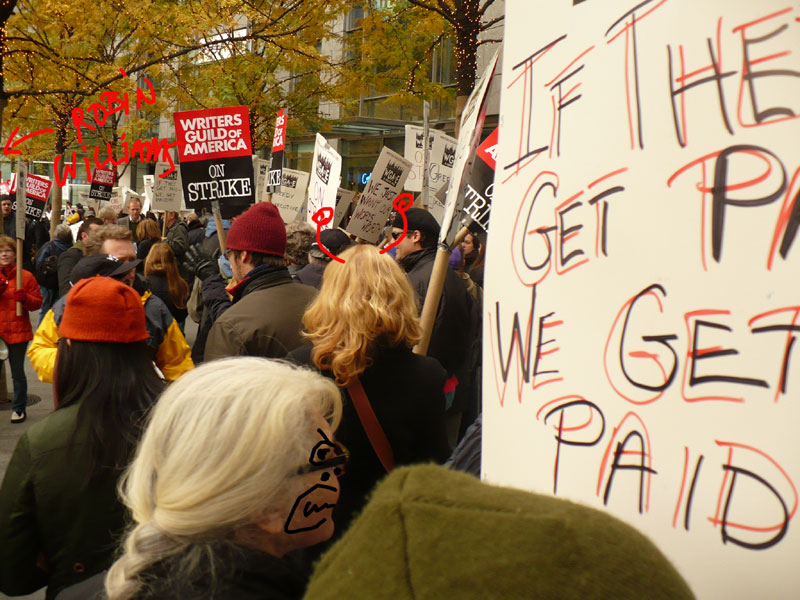 Support the Writers! They're really not being dicks about stuff...

Also saw Robin Williams, Holly Hunter, Paul Bettany, and some other SNL people and stuff but I felt weird taking pictures. It seemed like something nobody else with a picket sign was doing...